“We’ve averaged 30 or more cars at each event this season, but it’s nice to see that number back at 33,” SCCA Pro Racing Vice President Steve Oseth said. “Our growth is continuing and we anticipate an even larger field for the remaining championship events.”

“I am really happy to have Elliot and Tyler join our program,” said Indianapolis 500 two-time starter and MDD team owner Jay Howard. “Elliot has been at the front of the field in whatever he races. He has won his fair share of SCCA 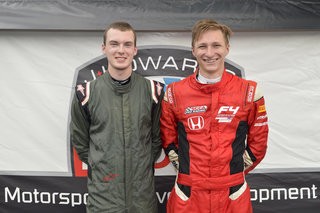 events in the past few months and will be up to speed quickly in our F4 machines. Tyler has been pretty impressive in other series of competition and I he will get up to speed pretty quickly at VIR. We are looking forward to having him as part of the MDD family.”

Graduating from the karting ranks with a championship and several podium finishes, Finlayson stepped into open-wheel competition at the end of the 2016 season with an impressive racing resume. In 2017 alone, the 21-year-old driver earned two SCCA championships and won the SCCA June Sprints Race in a Formula Enterprise. VIR will be his first time in an F4 U.S. car.

“I have watched the F4 U.S. Championship closely since its introduction last year. I have been following with the goal to compete,” Finlayson said. “I am very excited to make my debut in the series in the No. 14 car with MDD program. I will be looking to make the best of my opportunity.”

O’Connor tested with the MDD team at Gingerman Raceway earlier this year. Showing speed and skill, the 20-year-old proved to be a quick learner. O’Connor is entered in the Lucas Oil Formula Car Racing Series this season, and to-date, is in fourth place in the overall championship standings. He makes his F4 U.S. debut in the red, blue and black No. 11 MDD car.

“I’m looking forward to the opportunity to step-up to a higher series,” said O’Conner. “Driving a car with slicks and so much downforce is something new to me. I also haven’t competed in a series with standing starts. This weekend is going to be a lot of firsts for me. F4 U.S. is a highly competitive series and this weekend gives me the opportunity to prove myself against best in the series.”

This season, the MDD program has created a culture of signing winning drivers for single event weekends, stealing points from championship drivers and adding to the MDD team-point tally. At Indianapolis Motor Speedway, Braden Eves of Gahanna, Ohio, captured the team’s only podiums of the season with a second and third place finish. He also placed a top-five in the last IMS round. Colin Mullan of Danville, California, competed for the first time with MDD at Mid-Ohio Sports Car Course. Mullan scored 16 points for the team with his two top-10 finishes and rallied during the final round from a 31st-place start to finish 13th. The incredible forward push earned Mullan the JRi Shocks Hard Charger Award.

F4 U.S. will participate in one practice session and qualifying on Friday. Race 1 and Race 2 will be held on Saturday. Event 5 wraps-up on Sunday with the final race of the weekend. Fans can follow live timing and scoring on F4USChampionship.com.