Global Racing Group driver Blake Upton of Sammamish, Washington, secured the next step in his formula career, inking a full season deal in F3 Americas Championship Powered by Honda with the multi-platform team. Upton, 18, started his single-seater career with GRG in 2018, driving the signature orange and black No. 19 Formula 4 United States Championship Powered by Honda car.

“I am happy to announce that I will be competing for Global Racing Group in the F3 Americas Championship for the 2019 season,” said Upton. “I cannot wait to continue the next step in my career with our amazing team. I would like to give a special thanks to everyone who has believed in me, especially my Mom and Dad.”

Upton continued, “I am incredibly hyped to get behind the wheel of the Ligier JS F3 for the first time. The performance difference between the F4 U.S. and the F3 Americas car will give me a whole new set of challenges in this year, and I cannot wait to face them. I look forward to finally feeling that speed everyone always talks about, for myself.”

Before supporting the NTT IndyCar Series at Barber Motorsports Park in Leeds, Alabama, April 5-7, Upton will reunite with his GRG squad at Inde Motorsports Ranch in Wilcox, Arizona, for multiple days of intense testing and training.

“It’s been a true pleasure to work with Blake since he first put his feet in a race-car just a little more than a year ago,” said Global Racing Group team principal Christian Pedersen. “Throughout 2018, Blake demonstrated an incredibly hard work ethic that will help drive him further forward this season in F3 and beyond. In 2018, he continuously improved his position in the field through the season, and most impressively, wasn’t involved in any incidents. There’s a level of smartness required to always stay clear of contact which is essential in fast development. “Only when a driver is behind the wheel driving is that driver developing, and Blake is a great testament to that. We are looking forward to the first race at Barber.” 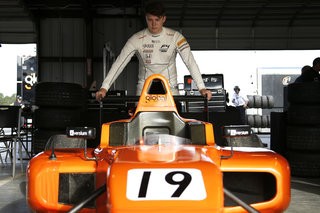 Global Racing Group expanded its F3 Americas roster to four entries for the upcoming season. In the off-season, the team also established a pathway to Europe through a new foothold partnership with Douglas Motorsport in the United Kingdom, filtering F3 Americas graduates to the next level of open-wheel competition in Europe.

For more information on the F3 Americas championship, drivers or teams, visit F3Americas.com.