Danish-American Benjamin Pedersen took pole position on Friday afternoon in the closing stages of the F3 Americas Championship Powered by Honda qualifying at Sebring International Raceway by eight thousandths of a second over Abel Motorsports driver Jacob Abel of Louisville, Kentucky, with a time of 2:00.567.

“I was pushing hard all session and came out on top by only eight thousandths of a second," Pedersen said. "I was running P3 for three quarters of the session and I knew the fuel load was getting low so I started to give it everything I had to get pole. Then getting that the fast time on the last lap, I have to admit, that's the hardest I've every pushed in qualifying. At the end of the day we got pole and that's exactly what we were looking to do."

In an attempt to retake the fastest lap for pole position, Abel looped the car caused by a mechanical failure on the last lap of the session, settling for an off pole start.

“It was a shame that we had a failure, because we were really quick out there today, leading the times for 95 percent of the session,” said Abel. “Before spinning, I was on pace to take back pole. The Abel Motorsports guys have a long night ahead of them to get the car prepared for Saturday’s race.” 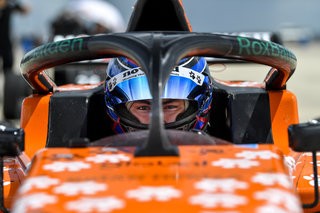 Velocity Racing Development's Mathias Soler-Obel also missed out on pole-position by a narrow margin with a time of 2:00.737. He will lead Row 2 with the F3 Americas Champion elect Dakota Dickerson on his outside.  John Paul Southern Jr and James Roe Jr. rounded out the top six for a Row 3 start.

Dickerson clinched the championship in the penultimate round at Road America, and while his goal is still to be competitive for the weekend finale, the third-generation racer has other plans at Sebring International Raceway.  Dickerson is using the final event of the season to raise money for Nowzad Rescue. The organization helps reunite companion animals with American soldiers that they have formed a bond with while on deployment in Afghanistan.

His iconic Global Racing Group orange livery will be outfitted with dozens of black and white paws with the pets’ names of the donors from all over the world.

The racing weekend finale starts on Saturday with two races and will culminate on Sunday morning with the final race of the season.