After a race long battle, Kyffin Simpson was victorious in the final Formula Regional Americas Championship Powered by Honda round at Road America, his second win of the day, his fifth of the season.

Joshua Car led every lap from the pole with Simpson contesting Car multiple times for the lead, but the Cayman Island driver was unsuccessful in making the pass. Then on the last lap, Car made an unforced error, dropping a wheel at the exit of the Carousel and spun across track, gifting Simpson the lead.

"I thought the race was over to be honest," said Simson. "Then I saw Josh (Car) spin. I made sure not to hit him so I wasn't collected in the damage as well. Once I passed him, I was able to take it easy to the finish line. It was a tough race handling the car and I am glad we pulled through for the win."

Ian Rodriguez and Logan Cusson diced for third the first half of the race until a full course yellow brought out by an incident in Canada Corner halted their fight. During the safety period, Cusson pulled off with a mechanical issue just before the track went back to green, ending his podium run.

Rodriguez kept his pace to finish second, winning the Omologato Perfectly Timed Move of the Race for the multiple winning battles he had all weekend.

Varun Chaksey stalled at the start, and had a fantastic recovery drive through the pack to finish on the podium for the second time this weekend.

Car continued from his last lap spin to finish fifth. 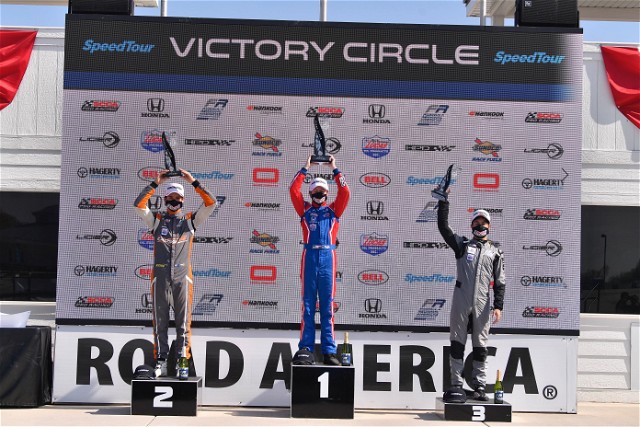