LAKEVILLE, CT (31 May 2021) – Mike Skeen captured the Motul Pole for today’s TA2® race with a fast lap in the closing seconds of the Trans Am Series presented by Pirelli qualifying. The Trans Am Memorial Day Classic concludes today at Lime Rock Park with the TA2® 68-lap race on the 1.478-mile Classic Course. The 20-car feature is set to take the green flag at 1:15 p.m.

An impressive spectator turnout met with dry but chilly conditions for the traditional holiday SpeedTour, but while the heavy rains have left Northwest Connecticut, competitors were greeted by a very damp track that necessitated using Pirelli rain tires to qualify. The field is expected to switch to Pirelli slick tires for the race.

Skeen turned in a best lap of 57.469-seconds in the No. 1 Liqui-Moly/Turn 14 Distribution Chevrolet Camaro for his second-consecutive Motul Pole Award, and ninth of his career – eighth in TA2®. 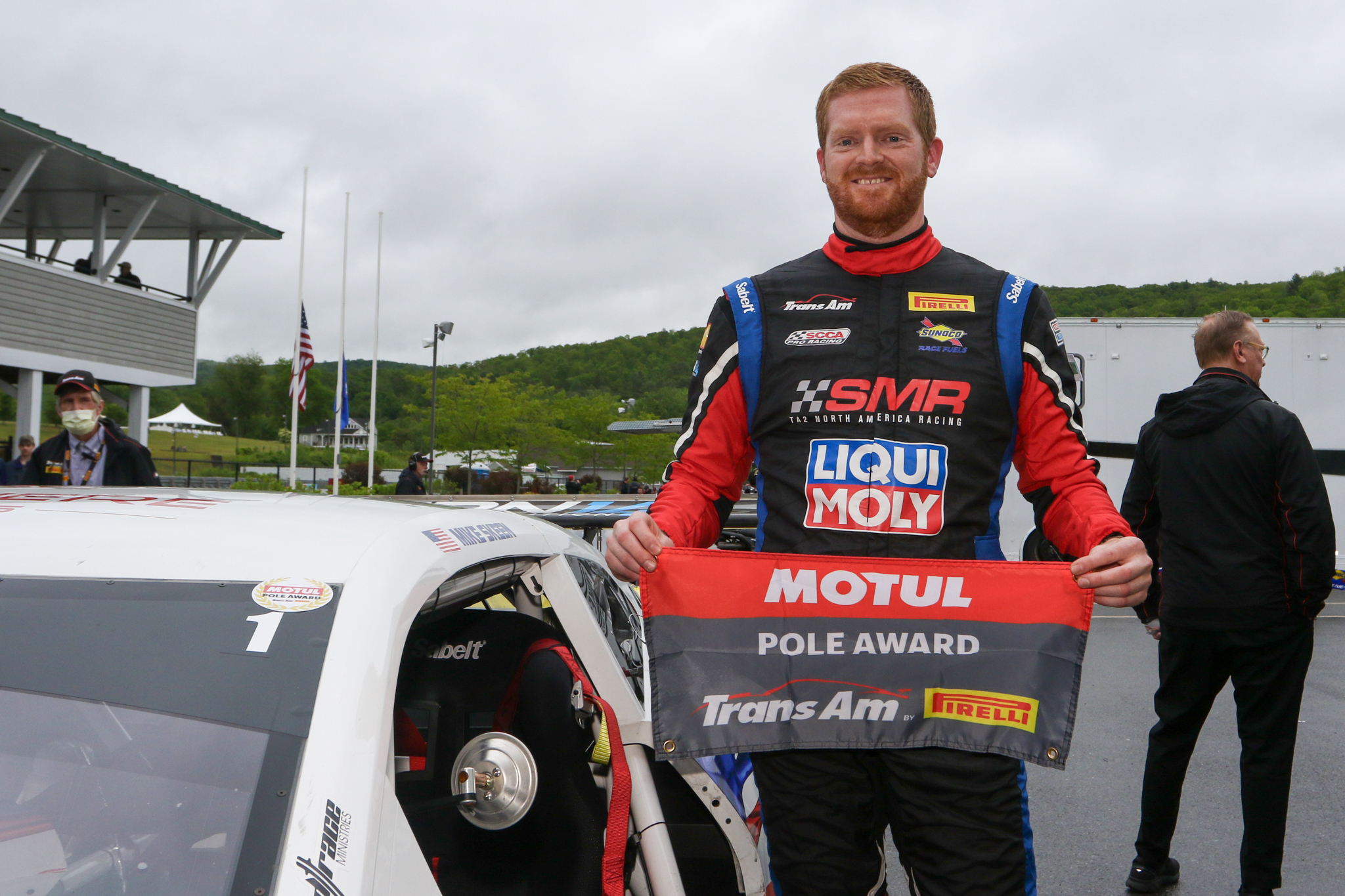 “Winning the pole will be great for this afternoon,” said Skeen, who pitted to have a quick adjustment on his left-side tires. “This is also big for Stevens-Miller Racing and our Turn 14 guests for this weekend. It’s going to be really tricky in the race. You can go too wide in Big Bend, and hopefully we can hold off everybody at the start and manage the race from there. We don’t want to get too rough in the beginning. We hope to play it smart and save it for the end.” 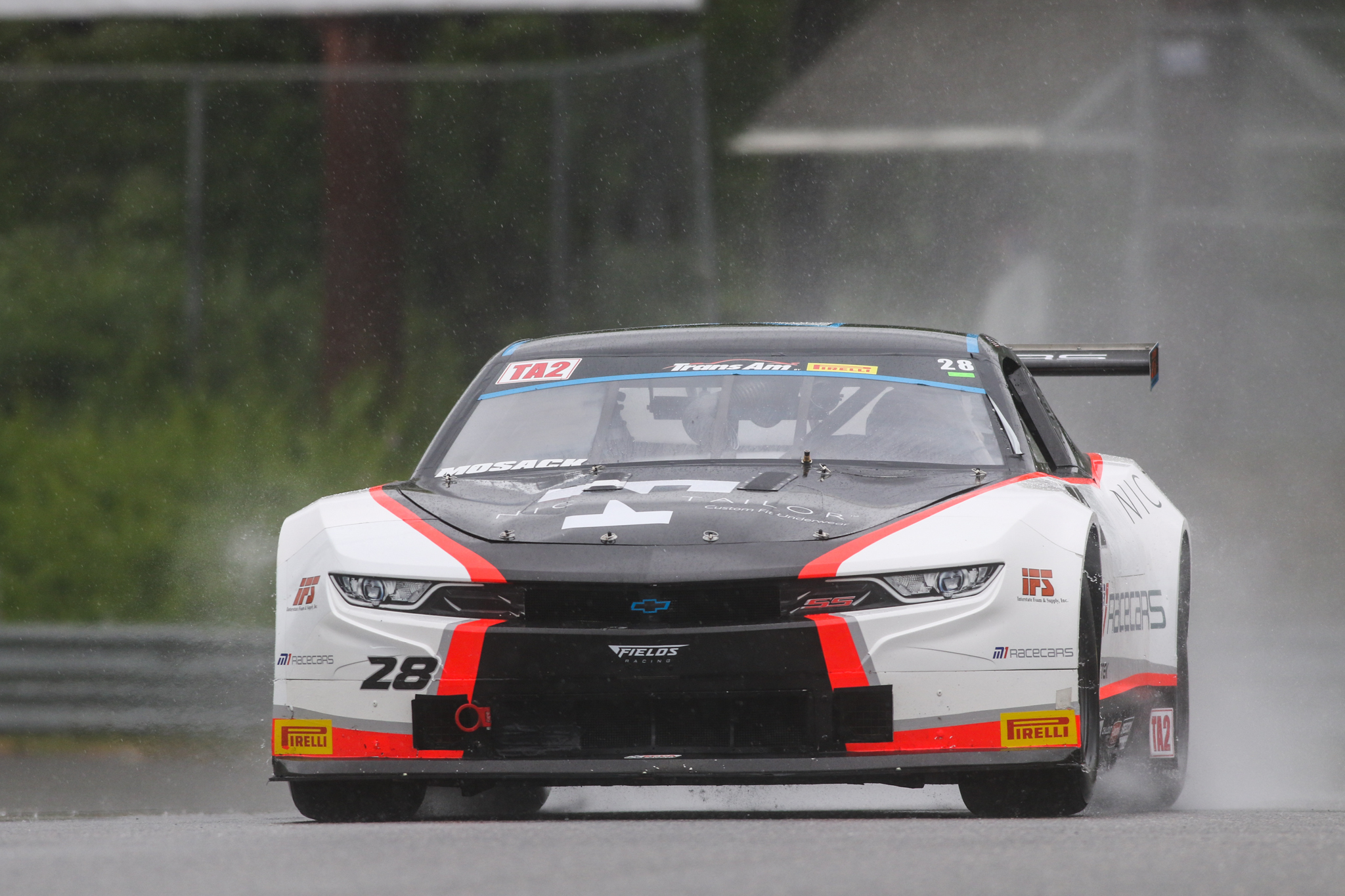 Rafa Matos will start second, turning in a best lap of 57.469-seconds at the checkered flag in the No. 88 3-Dimensional Services Group Ford Mustang. He had set the fastest time on five different occasions in the 15-minute session, and missed out on the point by just .189-seconds.

The late turnaround was a heartbreaker for Connor Mosack, who briefly held the pole in the No. 28 NicTailor/FS M1-SLR/Fields Camaro with a lap of 58.092-seconds. It’s his first visit to Lime Rock, and prepared for the race with simulator work and coaching from Scott Lagasse Jr.

The top three times were only separated by .623-seconds.

“The simulator work really accelerated my learning curve, just to know where I was going before I got here so we didn’t waste a session learning the track was the biggest advantage for us,” said Mosack. “Obviously, there’s some difference between the real thing and the sim, but it is definitely a big help for me.”

Two TA2® champions will start in front of Mosack in Row 1, but that doesn’t sway the NASCAR up-and-coming driver from setting his sights on taking his first checkered flag of his Trans Am career.

“We’ve raced against Mike (Skeen) and Rafa (Matos) all season,” Mosack continued. “I think we were fast enough to get first  and just got caught up in traffic at the end. The track kept getting faster as it dried, and we had a lot left. We will be good for the race and I am looking forward to racing up front and to the competition.”

The TA2® class will be in the spotlight when the Trans Am Memorial Day Classic concludes on Monday. Drivers will take the green flag at 1:30 p.m. Eastern.

The full race will be live streamed on the Trans Am by Pirelli Racing App: https://gotransam.com/news/Download-the-Trans-Am-by-Pirelli-Racing-App-to-Watch-Live-Events/7025