It was shades of 2018, with Matos taking his second Trans Am victory of the season and 12th of his career in the No. 88 3-Dimensional Services Ford Mustang. He also won at Mid-Ohio three years ago, when he went on to claim the TA2® championship.

“This was the best Trans Am car that I’ve ever driven in my life,” Matos said. “The Peterson 3-Dimensional team did a great job preparing the car, and it was a pleasure to drive. It was very predictable, and that’s what helped us win this race. I couldn’t be more proud of my team right now.”

Matos entered the weekend leading Mike Skeen by only one point. However, the driver of the No. 1 Liqui-Moly/Turn 14 Distribution Chevrolet Camaro had a mechanical failure and went off deep into a gravel trap on the 13th circuit.

From there, Matos survived three restarts, going on to win by 3.661 seconds ahead of new teammate Adam Andretti, who had a one-race drive in the No. 86 3-Dimensional Mustang. 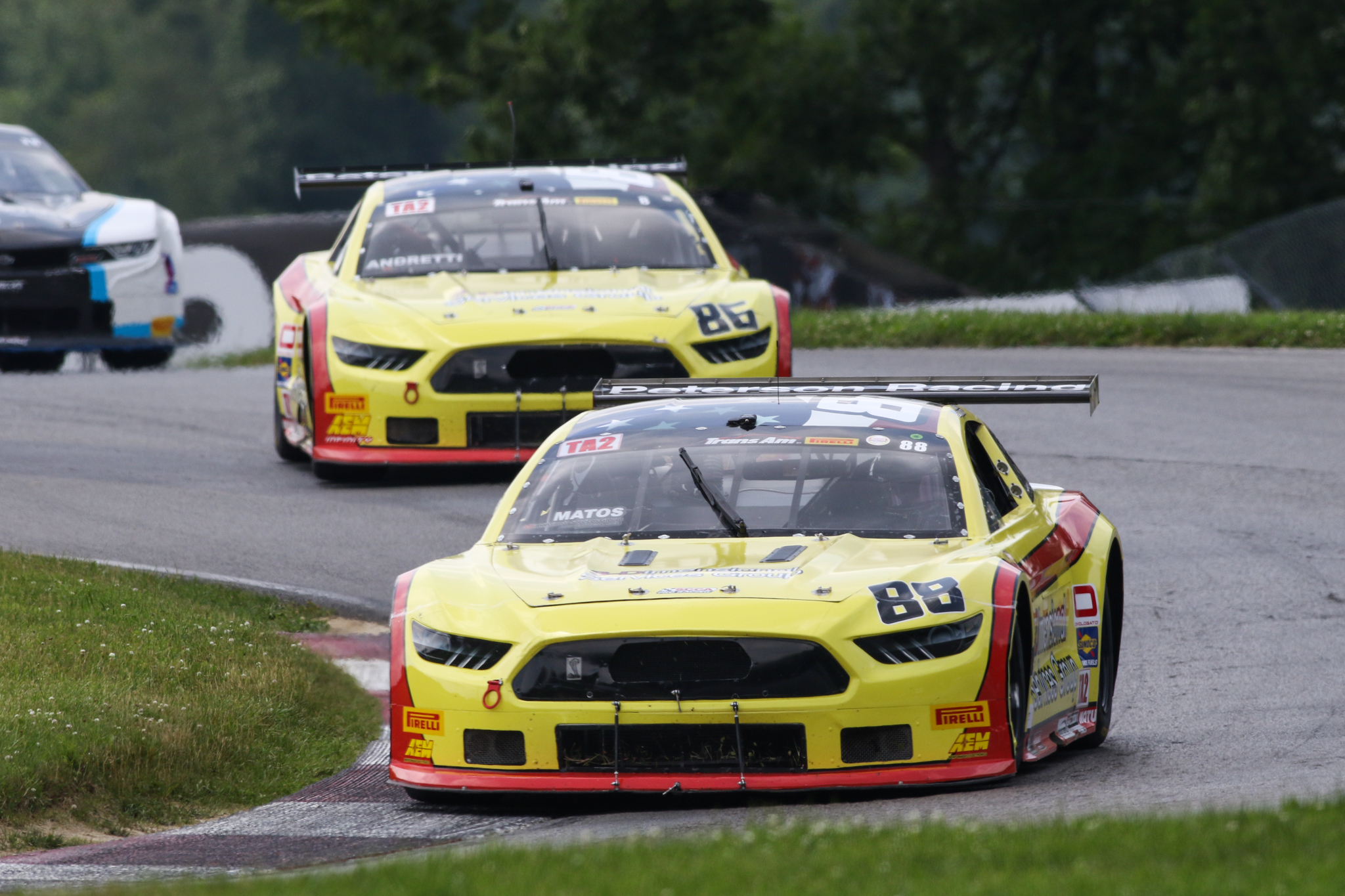 Andretti had to come back to take second from a determined Connor Mosack, who settled for third in the No. 28 Nic Tailor/FS M1-SLR /Fields Chevrolet Camaro. Mosack passed Andretti for second with five laps remaining. Andretti dove to the inside in Turn 4 two laps later and made the move stick, beating Mosack to the stripe by a mere 0.710 seconds to earn the Chill-Out Move of the Race.

“I almost forgotten what a war it is, just lap after lap after lap of battling,” said Andretti. “It’s so much fun and so rewarding. (On Mosac) “That kid’s good. The fans at home will be watching Connor Mosack for a long, long time. He’s an incredible talent and an awesome racer, racing side by side like we were with all the give and take.”

Mosack was running his ninth TA2® race, finishing fourth at both Road Atlanta and Lime Rock for TeamSLR.

“I was just trying to bide our time, because I knew we had a car to get to the front,” said Mosack after a career-best finish. “But I used it up a little more than I wanted to trying to get by the No. 86. It’s nice to finally get a podium. It would have been nice to be second and see what we had for Rafa, but we’ll do it next time.”

The top five were separated by 5.130 seconds. Tyler Kicera took fourth with nine laps remaining in the No. 5 Silver Hare Racing Ford Mustang, while Adrian Wlostowski was fifth in the No. 3 Hawk Performance/F.A.S.T. Auto Chevrolet Camaro.

It was a podium sweep for 3-Dimensional, as team owner Doug Peterson placed 18th in the No. 87 Mustang and was the Masters class winner.

“Our three-car team started Monday,” Peterson said. “I knew Adam was available, and we were able to get him a car. All good!” 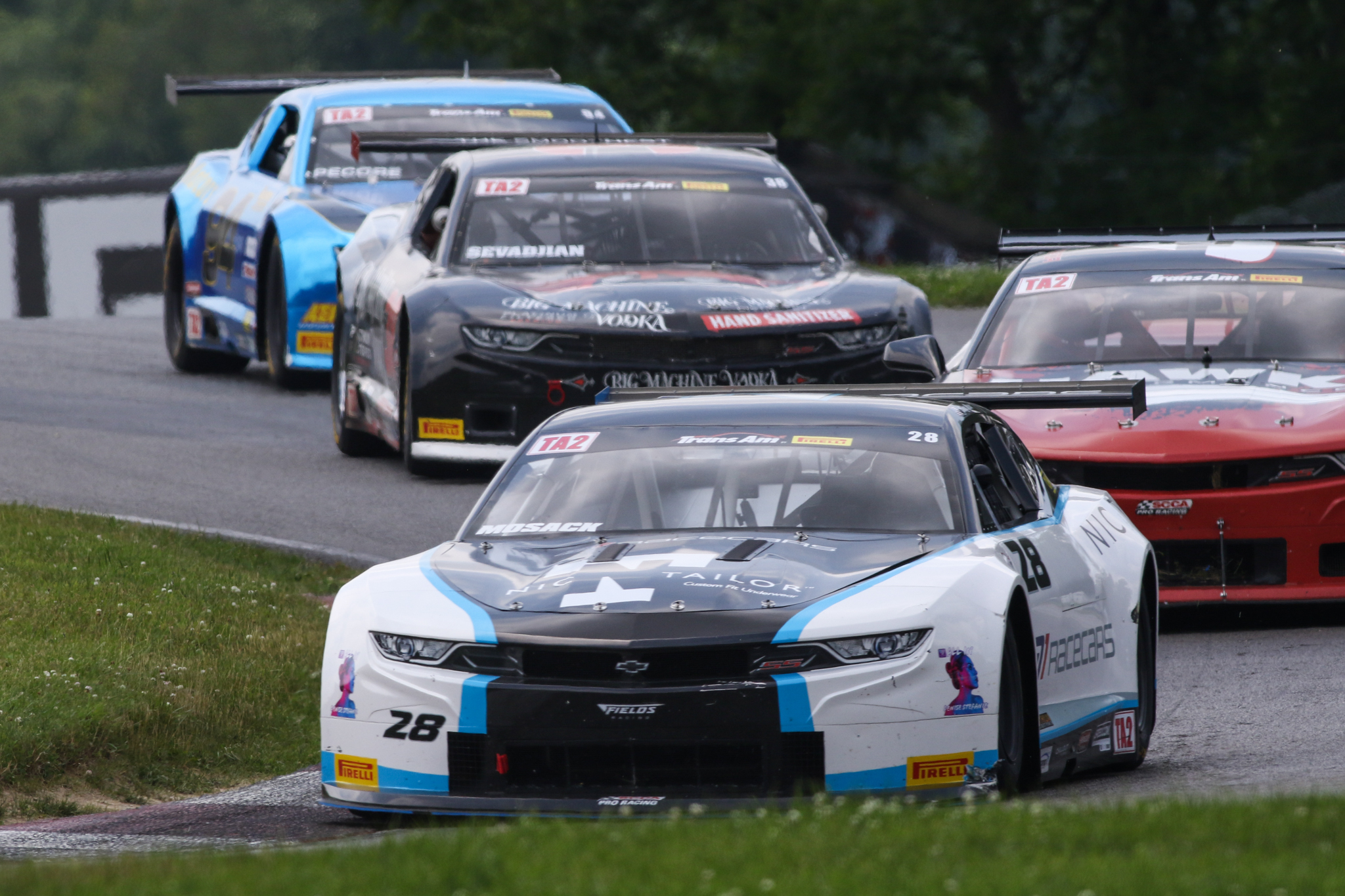 The complexion of the race changed dramatically on the 13th lap when Skeen went off in Turn 4, bringing out a full-course caution. Starting fourth, Skeen needed only two laps to get up to second. He was battling with Andretti for second on lap eight, when Skeen went wide and slipped back to sixth. He was running seventh when he went off.

“We had a really good start and got up to second,” Skeen said. “Then we had some kind of trouble. The car just wasn’t handling, and we were fighting. I was all by myself. I was trying to hold on, but then I had some kind of failure going down into China Beach. Unfortunately, we lose a lot of points, but we’re going to fight to the end.”

Racing went back to green for lap 18. Matos had a good restart ahead of teammate Andretti and Mosack, but three laps later, the event went back to caution for the stopped No. 48 Big Machine Vodka Ford Mustang of Scott Borchetta – who was running in the top 10.

Matos maintained the lead on the restart with 36:34 remaining, but caution returned only one lap later when Bruce Raymond came to a stop in the No. 54 Raymond’s Performance Mustang after getting together with Curt Vogt in the No. 23 Cobra Automotive Mustang. 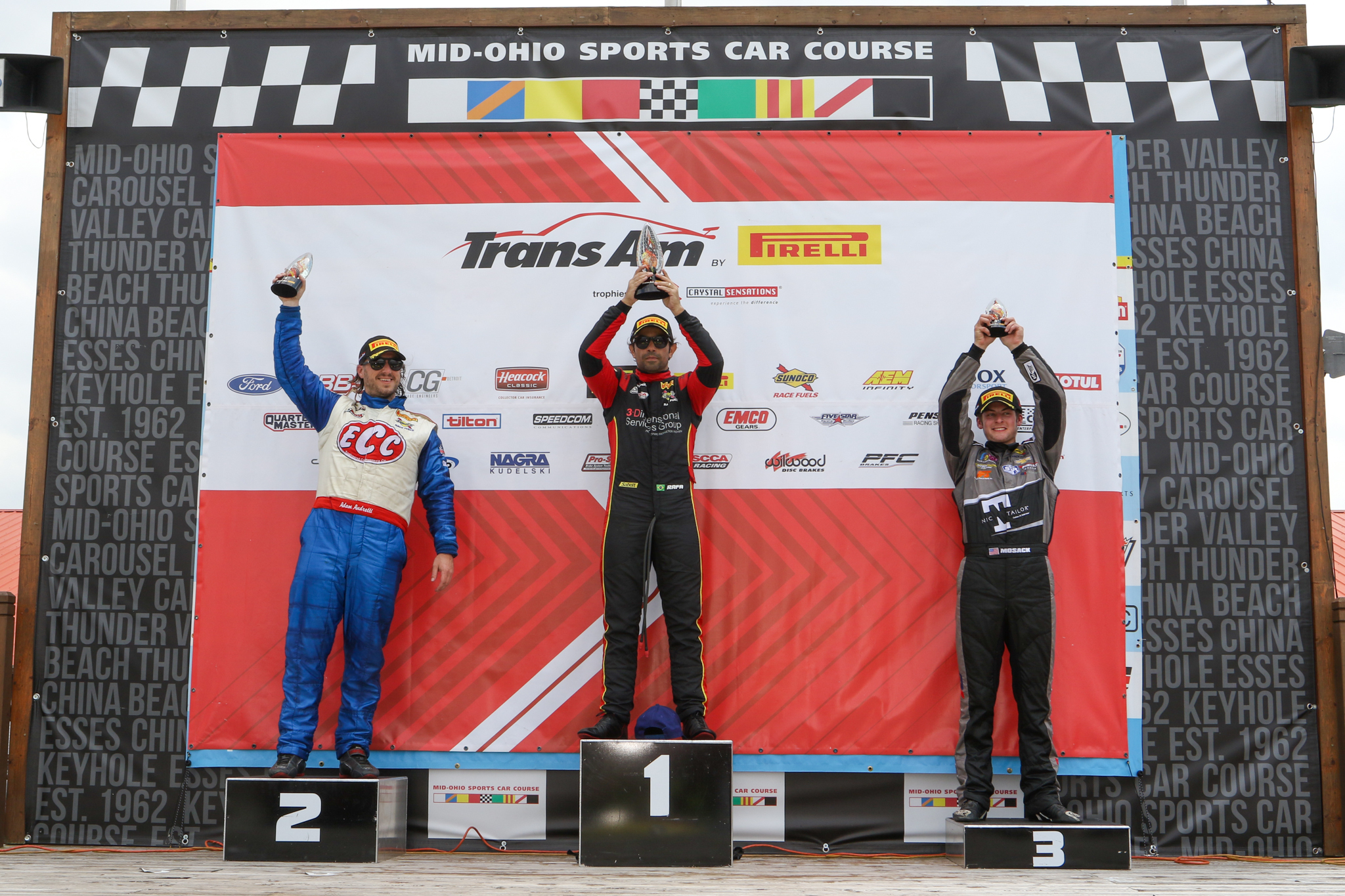 The Mid-Ohio weekend concludes Sunday with the TA/XGT/SGT/GT feature race at 2:15 p.m. ET.

Next weekend, the Trans Am Series presented by Pirelli continues at Road America, with the TA2® race on Saturday and the TA/XGT/SGT/GT event on Sunday.

The full weekend will be live streamed for subscribers on the Trans Am by Pirelli Racing App: https://bit.ly/35EAnND