Nashville, Tenn.- (5 August 2021)- The streets of Nashville will be alive with the sounds of American muscle as a record-breaking field of Trans Am Series presented by Pirelli TA2® Mustangs, Camaros and Challengers take to the temporary 12-turn, 2.17-mile circuit for the inaugural Big Machine Music City Grand Prix August 6-8 to support the NTT IndyCar Series. (VIDEO: Music City Grand Prix Course Guide)

A record-breaking class entry of 38 fire-breathing machines are expected for the event fielded by a deeply talented roster of Trans Am TA2® championship chasers as well as top motorsport guest drivers all looking to make a name for themselves in front of a near sold-out Nashville crowd. (Tickets still available)

With the course being new to the Trans Am schedule this season, the drivers will have to get up to speed quickly on Friday (August 6) for practice before going straight into qualifying on Saturday morning (August 7). The drivers will finish the fight on the streets on Saturday afternoon for the Big Machine Vodka Spiked Coolers presents the Franklin Road Classic with Race for RP. The full 100-mile sprint will air just hours after the winner takes the checkered Saturday on CBS Sports Network at 8:00 p.m. Eastern (More on the CBS airing)

“TA2® is our fastest-growing class which races some of America’s most iconic muscle cars side-by-side,” said John Clagett, president, Trans Am Race Company. “Nashville is a great city to celebrate American muscle cars—it’s a city that embraces Americana with a touch of nostalgia while offering up high-octane entertainment—Trans Am is that too, and therefore a perfect addition to the event.”

CHAMPIONSHIP INTENSIFIES ON THE STREETS OF NASHVILLE
The championship is in full tilt with Rafa Matos, Mike Skeen and Thomas Merrill leading the TA2® class standings (207-173-123) as the series enters the second leg of the season.

As a former Indy Lights Rookie of the Year and 2018 TA2® champion, Matos has raced on his share of temporary courses during his motorsport career including his win on the streets of Belle Isle Park with TA2® in 2018, but navigating a city layout that drives by Nissan Stadium, home of the NFL’s Tennessee Titans, and crosses the Korean War Veterans Memorial Bridge twice will be a first for all the Trans Am drivers. Crossing 553 yards of bridges, the race also marks the first time a professional racing series will cross a body of water. 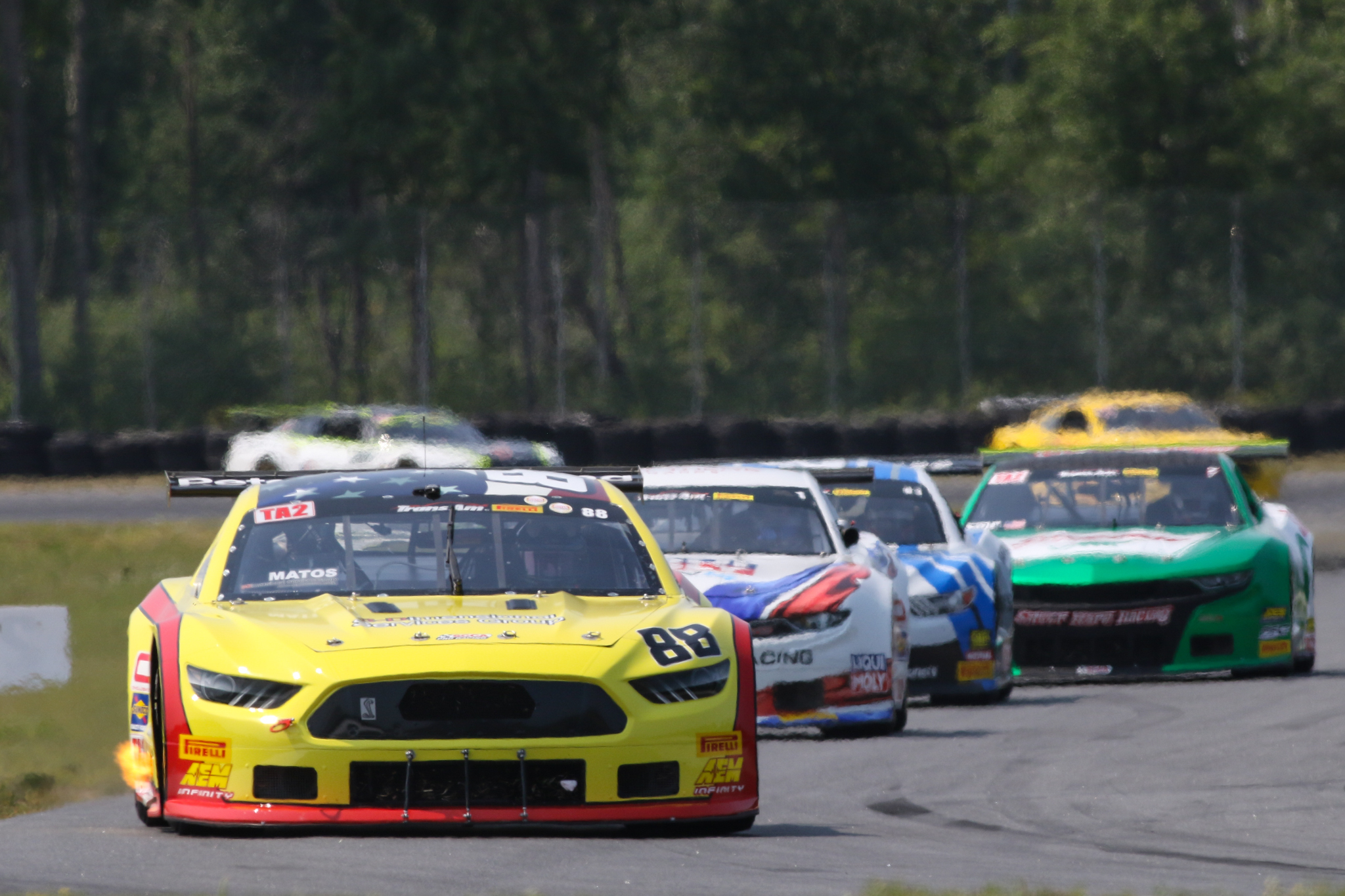 With three wins this season in the No. 88 3 Dimensional Services Group Ford Mustang, most recently in the last round at Brainerd, Matos has padded his championship lead by 34 points over Skeen. But, with the expanded field, the narrow straightaways and tight turns, Matos is looking for a good qualifying session to set him up for a clear track.

“I think it’s going be a great opportunity for Trans Am to showcase our type of racing on the streets of Nashville,” said Matos. “It’s going to be for sure very entertaining for the fans to see 38 cars going around the race course. For us drivers, I think getting clear track ahead of us is probably going to be the hardest part of the weekend. As far championship is concerned there’s still lots of racing to go and we have to remain focused on scoring points every race. We are ready for the challenge.”

Skeen (No. 1 Liqui-Moly/Turn14Distribution Chevrolet Camaro) will be pulling double-duty this weekend, splitting his time between street racing in Nashville and prototype competition at Road America for the IMSA event. Skeen will participate in the full Music City Grand Prix weekend before leaving for Wisconsin on Saturday following the TA2® race.

Merrill’s last victory was during the season debut at Sebring where he took a dominant win following race long battles with championship leaders Matos and Skeen. Though he has not had a follow-up victory this season, Merrill’s consistent results have slotted the No. 81 HPTuners/MikeCopeRaceCars Ford Mustang driver into third in points.

With such a large field of talented drivers, there are several competitors who could potentially take valuable points away from the leaders’ championship campaign this weekend. Franklin Futrelle (No. 58 Armada Analytics/Innoviv Ford Mustang) was a dark horse in Atlanta, taking his first career TA2® victory after only three Trans Am races. Then there’s Adam Andretti (No. 86 3 Dimensional Services Group Ford Mustang), who is the only full-time Trans Am driver entered, other than his teammate Matos, to win a street race in a TA2® car.

Also challenging the top drivers will be Tony Ave as he goes from a team-owner role to driver this weekend. The most recent street race for Trans Am was in 2019 at Detroit’s Belle Isle Park where Ave drove to victory in his 100th Trans Am race. 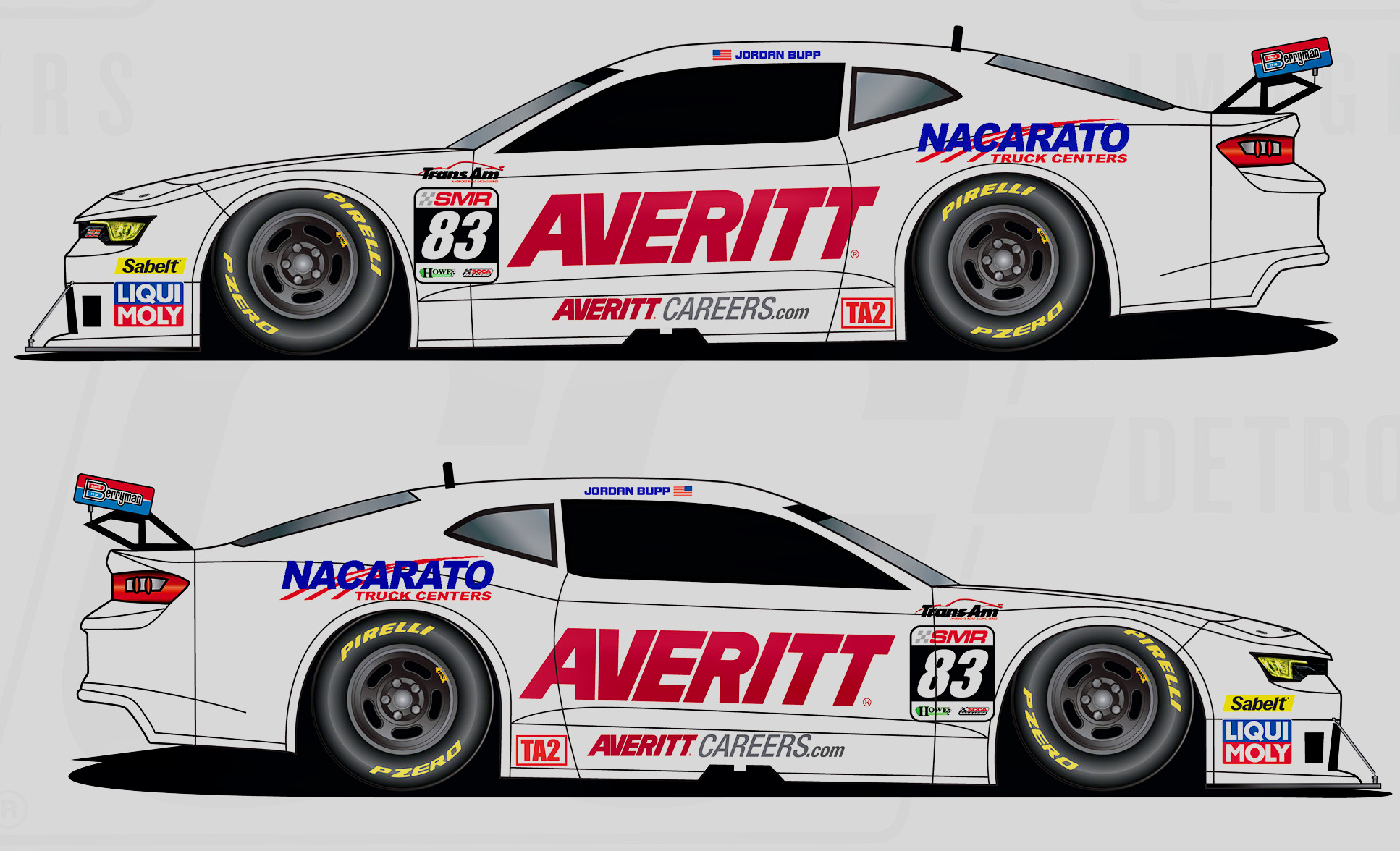 Occasional Trans Am competitor Boris Said will step into a TA2® car on Friday for ECC Motorsports (No. 79 ECC/AnchorBolt&Screw Chevrolet Camaro).  Said has plenty of experience wheeling the more powerful TA class cars around temporary courses. This weekend, Said is on the hunt to break a tie with fellow five-time street course winner Dorsey Schroeder with a victory at Nashville. Said also won the closest street race finish, beating Greg Pickett by 0.147-seconds in 2005 on the bumpy layout in San Jose, California.

Another street experienced driver returning to the TA2® lineup after a long absence is Jordan Bupp. The second-generation and race-winning Trans Am driver will be behind the wheel of the No. 83 Averitt Express/Nacarato Truck Centers Chevrolet Camaro for Stevens-Miller Racing for Nashville.

“We’re looking forward to getting back to action in TA2®,” said Bupp. “I absolutely loved racing in Detroit. Street circuits really suit my driving style. With the help of my dad, my wife and my entire family, we were able to put together this effort. Teaming up with Joe Stevens and SMR is a perfect fit as I have a lot of time in a Howe Racing Enterprises chassis. Joe and the team have always treated me like family, and it was great to work with them at Road America and get some seat time prior to Nashville.”

ACCOMPLISHED MOTORSPORT DRIVERS SET TO CHALLENGE TRANS AM REGULARS
The unique race for Trans Am has attracted several top names across all motorsport disciplines like NASCAR Xfinity champion Daniel Suárez and former BMW and Ford factory driver Joey Hand.
Hand, the 2011 ALMS GT champion and class winner at the 2016 24 Hours of Le Mans, will pilot the No. 70 Nitro Motorsports TA2® Mustang. 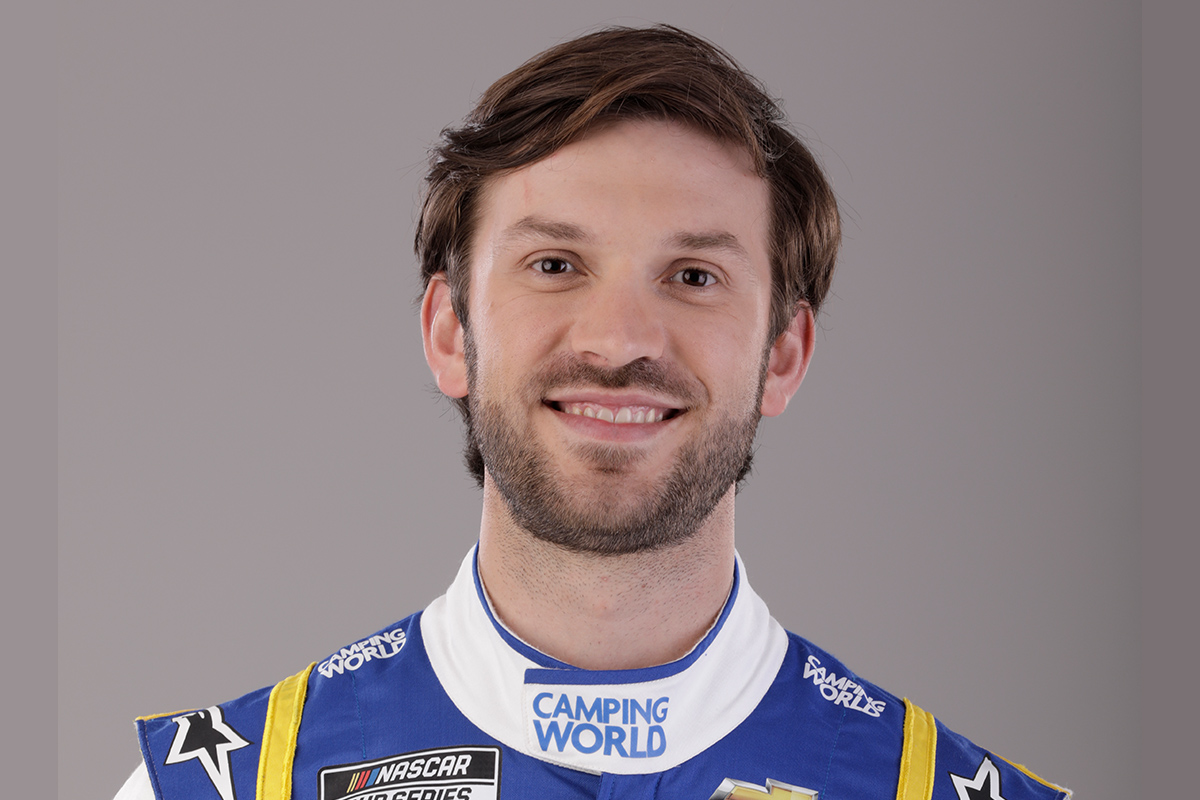 “I’m going to hustle this beast through the streets of Nashville at the Music City GP,” said Hand. “I’ve never raced in Trans Am and won’t wheel this thing until I get there. I love street courses though, and I love street fighting!”

NASCAR Cup Series driver, Suárez will pilot the No. 75, Wesley Financial Group TA2® Chevrolet Camaro, for Silver Hare Racing.  The 29-year-old was the first non-American to win a major NASCAR National Series championship in 2016 when he claimed the NASCAR Xfinity Series championship and currently competes full time in the NASCAR Cup Series for the newly formed Trackhouse Racing Team (owned by Justin Marks).

“It's going to be a lot of fun on that new track, I am excited for it”, said Suárez about making his Trans Am debut this weekend.  “I have wanted to run Trans Am with Justin (Marks) for a long time and we finally get to do it this weekend in Nashville. Justin is really good as are a lot of the drivers in this race. The Silver Hare Racing guys will give me a great car and I hope we put on a good show for everyone.”

HOMETOWN BOYS LOOKING TO DO SOME GOOD
It’s all business for Music City Grand Prix investors Scott Borchetta and Justin Marks and Trans Am race sponsor Ken Thwaits until Friday when the trio take to the streets of their hometown.

Borchetta, CEO and president of all things Big Machine, Marks, NASCAR team owner and race car driver, and Thwaits, owner of Franklin Road Apparel, were instrumental in bringing the Trans Am Series race at Nashville to life.

“The opportunity to be able to race in the first-ever Big Machine Music City Grand Prix weekend in the Trans Am Series is a dream come true. Working with the Music City Grand Prix team over the last several years to bring IndyCar back to Nashville has already been very gratifying,” said Borchetta. “Now, knowing that the team and I get to be part of our hometown Grand Prix and get the chance to race through the streets (and across the bridge) downtown, this weekend has a huge circle around it on all of our calendars!”

Thwaits’ was also a key partner in bringing TA2® to his hometown. His fashion boutique, Franklin Road Apparel will showcase its official Trans Am branded apparel at Nashville in a pop-up store located next to the Trans Am pit area in the main paddock. The booth will feature high-end Trans Am tee-shirts with Borchetta’s Big Machine Vodka  Spiked Cooler TA2® car ripping around the track. Only a limited number of shirts will be produced, making it an instant commemorative item to mark Trans Am's inaugural visit to the streets of Nashville. 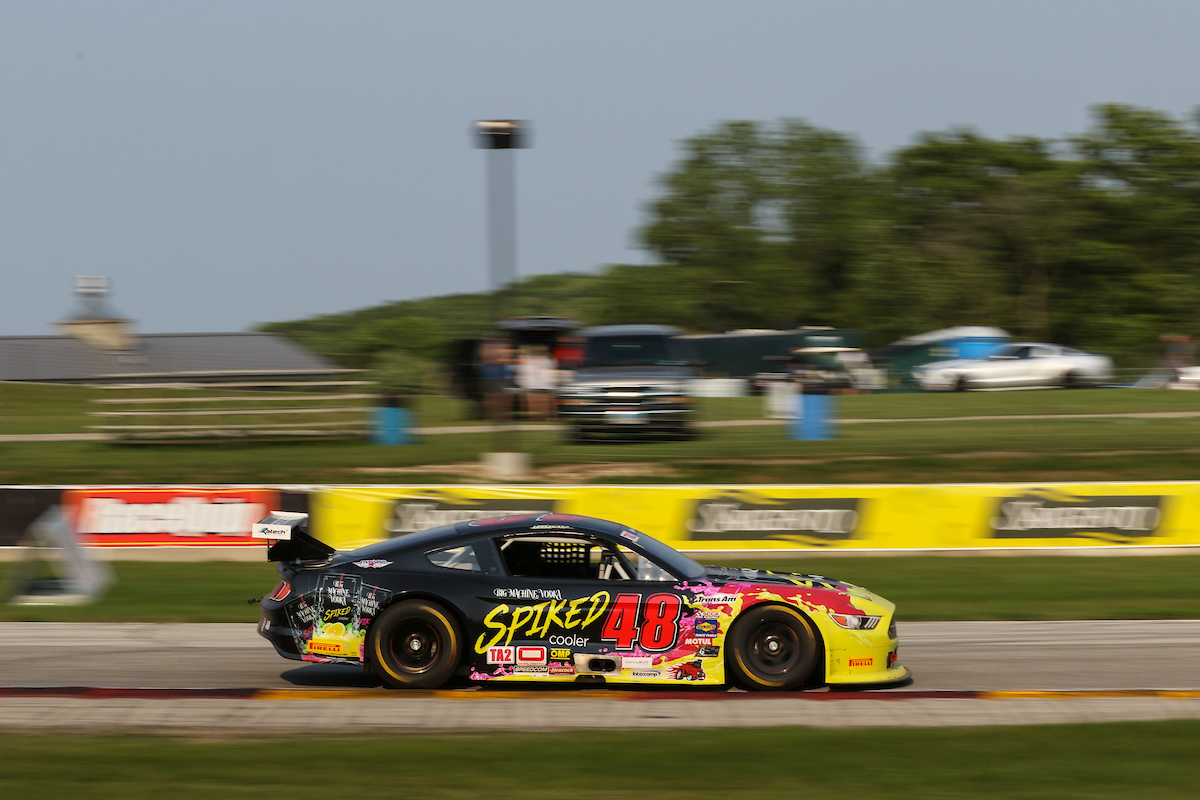 Of all the drivers competing at Nashville, Marks arguably knows the most about the track as part of the ownership group behind the Music City Grand Prix. Marks also owns Trackhouse Racing, which is currently in its inaugural NASCAR Cup Series season with driver Daniel Suarez under its banner.

“I just think Trans Am is a great format for racing,” said Marks. “I like hung-body road-race cars, lots of horsepower, and the race formats are great. It’s a sprint race, but it’s just long enough to have an endurance element to it. I think it’s a great series, great racecars and a great format. We’ve got a lot of big-name drivers this weekend and I think it’s a great, healthy road-racing series and it’s going to be a lot of fun.”

After six rounds, Borchetta sits 11th overall in the TA2® championship standings with two top 10 finishes and a top five standing in the most recent race at Road America driving the No. 48 Big Machine Vodka Ford Mustang. Marks and Thwaits typically compete in the Trans Am Series higher horsepower TA class. Marks is the highest scoring class rookie with a podium visit in Atlanta while Thwaits is fourth overall in the TA championship, and first in the Masters Class. Both Thwaits (No. 6 Franklin Road Apparel Chevrolet Camaro)  and Marks (No. 99 BC Forever/M1-SLR/Fields Chevrolet Camaro) will make their season debuts in TA2® at Nashville.

Same-day coverage of the TA2® Big Machine Vodka Spiked Coolers presents the Franklin Road Apparel Classic with Race for RD at the Music City Grand Prix will be featured in a two-hour special aired exclusively on CBS Sports Network on Saturday, August 7 at 8:00 p.m. Eastern. (VIDEO: Trans Am Returns to CBS Sports Network)

Real-time updates will be featured on Trans Am social platforms (@GoTransAm) and live timing and scoring will be available all weekend at www.GoTransAm.com/livetiming.