Jason Alder Victorious in Opening Round of F4 U.S. Competition at COTA

Jason Alder Victorious in Opening Round of F4 U.S. Competition at COTA

AUSTIN, Texas (October 24, 2021) – When Formula 4 United States Championship Powered by Honda (F4 U.S.) entered the weekend, four drivers were mathematically eligible for the driver championship. Among those drivers, Jason Alder entered the weekend third, 25 points back from the leader, and knew he would need a near perfect weekend to secure the 2021 F4 U.S. Driver Championship title. On Saturday afternoon, he checked off his first box with a win in Race 1 at Circuit of the Americas (COTA) driving his No. 77 Velocity Racing Development Ligier JS F4. 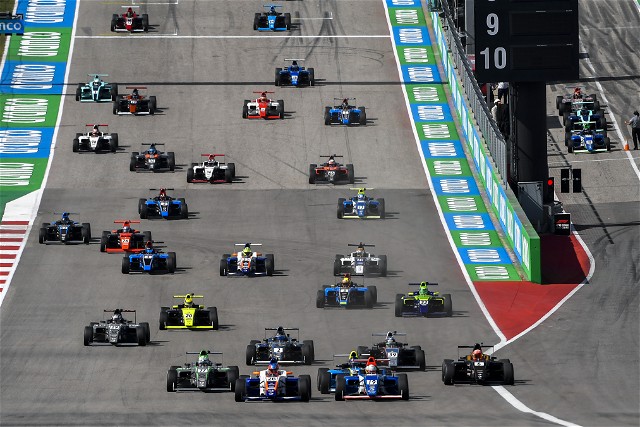 As the lights went out, Alder was in the fourth position. A methodical start allowed him to take over the lead on the backstretch just before the caution flag waved to bring the field back together. An aggressive restart on his Hankook Tires allowed Alder to go three-wide into Turn 1 to maintain first place before steadily hitting his marks, and sailing off toward the checkered flag and provisional race win.

“Race 1 really couldn’t have gone much smoother,” said Alder after the race. “Hopefully I’m not speaking against what will happen in Race 2. But I’m feeling confident starting on the front row with my teammate, provisionally, next to me. The car is right where I want it to be going into the final race. The VRD guys do a great job getting the car to where I need it to be to do my job. I’m looking forward to doing the exact same thing again in Race 2 that we were able to do in Race 1.”

Noel Leon, who entered the weekend as the points leader, finished second in the 10-lap Race 1 at COTA. Leon had a steady performance, both starting and finishing the race in the second position.

“It’s good for the championship, we only need to finish on the podium and that’s it, then we are the champion. Let’s hope tomorrow for a good race and good fun.”

Christian Weir drove the No. 31 Ligier JS F4 for Gonella Racing to a third-place finish. It was his second podium in just four F4 U.S. starts for the 15-year-old driver from Naperville, Ill. For Weir, it was an exciting race from start to finish with lots of opportunity for close competition.

“I had an amazing start,” said Weir after the checkered flag. “I just got kind of boxed in in turn one and fell back to fourth. But I kept moving around, made it back up to third and then fell back to around sixth. Going into turn 1, I managed to pass all three of the cars in front of me through turns 2 and 3, and I just stuck there until the end of the race.” 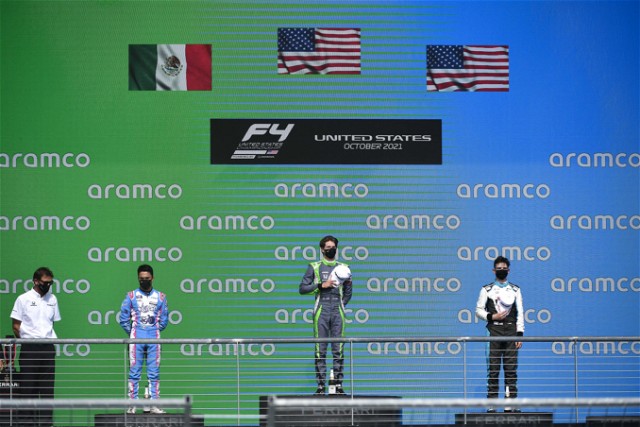 Mac Clark, the fourth driver to round out the driver championship battle, finished seventh in Race 1 at COTA. The driver of the No. 26 for Gonella Racing entered the weekend second in points, just eight and a half points behind Leon.

Mac Clark, the fourth driver to round out the driver championship battle, finished seventh in Race 1 at COTA. The driver of the No. 26 for Gonella Racing entered the weekend second in points, just eight and a half points behind Leon.

Drivers have one last chance for victory in the 2021 season and a champion will be crowned as F4 U.S. returns to the track at COTA today at 10 a.m. CT for Race 2.

All results are provisional. For the full run-down and final results, visit: https://www.f4uschampionship.com/pages/2021-formula-1-aramco-united-states-grand-prix-results