Get to know Raoul Hyman in 10 Questions

Get to know Raoul Hyman in 10 Questions

With seven wins and 12 podium finishes in the 2022 season’s 12 races to date, Raoul Hyman has established a 51-point lead in the championship driver’s points standings with just six races remaining in the season. The 26-year-old South African-born Englishman won the F3 Asian Championship in 2018 and competed in FIA Formula 3 before a two-year hiatus during the peak of the COVID-19 pandemic. One of the PMH Powering Diversity Scholarship winners, Hyman pilots the No. 27 Bethesda Holdings Limited / Solomon Capital Enterprises / Oaklands / Kinross Ligier JS F3 for TJ Speed Motorsports in the Formula Regional Americas Championship Powered by Honda (FR Americas).

RH: “Recently, I’ve been trying to keep my emotions in check and keep a certain calmness. It’s difficult sometimes to differentiate emotions and general feelings. For instance, there will be anticipation—you’re excited prior to the start of the race. There’s always a bit of nervousness, but a good nervousness. Sometimes it depends what’s going on. As an example, during the last race, the guys were on the radio quite a lot, I kept telling them not to be. I guess it sounded like I was flustered, but I wasn’t at all; I was just focused.” 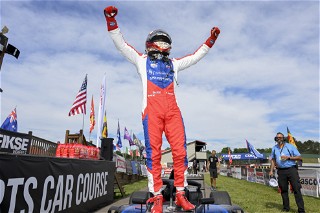 RH: “I just used my initials, to be honest. My name is Raoul Joshua Hyman, so I just used the R, J and H. That’s pretty much it. I try to make it look cool. I remember one time I was going to the track—I was probably 20 at the time—it was an hour away. I spent the whole hour sitting there practicing my autograph.  Even still, I felt like they all looked equally terrible. I realized that I’ll just have to grow to accept it as it is.”

RH: “I like to do my notes. Do my notes and try to understand why it was tough, what the factors were and decide how to respond. I think it gives closure, and if you have closure, you can move on. I used to struggle with that a bit. I’d go and be by myself and get on myself.

“More and more, I’m trying to enjoy every day that I have at the track. After being away for so long, I realize that it’s a big thing that we’re able to do this. I try to be very matter-of-fact, see the situation as it is and respond the best I can. In order to do that, you have to come at it without being upset, or angry, or frustrated, or whatever. You have to just let it go and start fresh. That’s easier said than done. I can’t say I do it all the time, but I try.”

If you didn’t drive racecars for a living, what would you do? I feel like this should be an easy guess since you have gone to law school.

RH: “Nope! I don’t know for sure. If I wasn’t racing cars, I’d like to do bikes. I’m a big MotoGP fan. MotoGP, Moto2, Moto3—all of that. I think the racing there is the best in the world. If it wasn’t racing at all, maybe I’d be a pilot, something with speed. Not like a commercial pilot, but a “send it” pilot. Perhaps I’d try to become a pilot in the Royal Air Force. I watched Top Gun recently; it really had an effect on me. If I watched Suits the night before you asked me this, then maybe I’d say I’d become a lawyer.

“I’ll definitely do something in business when I finish racing, but hopefully that’s a long way off. That’s where the law degree comes in; it wasn’t to become a lawyer. It’s for business and moving forward after racing.”

RH: “In this paddock? Just the guys on the team, to be honest. This is my first time racing in America, so I didn’t know any of these tracks or any of the people. I met everyone on the first day. I’ve spent the most time with Tim [Neff] from TJ Speed—he’s my engineer. With all the debriefs, we’re always discussing everything. Sometimes we’ll drive to the races together. Out of everyone, I know the most about Tim. As for how long I’ve known them, though, everyone’s quite new.” Something that’s really unique about you is that you have a law degree from City, University of London. What one day from law school sticks out the most in your memory and what happened?

RH: “I’d say exam day. I’m one of those last-minute studiers. I never slept very long before an exam. A lot of times, it was because I was under pressure for the timing; I spent all my time at the track or training. It was hard to do both.

“For example, my final exams in undergrad: I had an exam at 6 p.m. that lasted two hours. I got home at 9 p.m., ate dinner and studied. I studied until 5 a.m., slept an hour, and then got back up to study some more. I wrote another exam at 10 a.m., but I left that early to get to the airport for a race in Spain. I did the race weekend, came back on Monday and wrote another exam. I remember those days. You didn’t know how it was going to go, but you just gave it everything.”

Question from Scott Goodyear… What’s the most difficult thing about being away from home—from your friends and family? How often do you get back to see them?

RH: “Ah, it’s actually not that difficult for me because I go home after every race! I still live at home, so I get to spent a lot of time with my family. I live with my parents and my sisters are just down the road, so I see everyone, every day.

Do you have a question that I can ask the next driver I interview? It will be Dylan Tavella.

RH: “How long does he spend on his hair before he arrives at the track? Hey, it always looks good!”