Get to know Dylan Tavella in 10 Questions

Get to know Dylan Tavella in 10 Questions

DT: “Yes. I think there’s a whole mix of things that can go into it, but I very much do believe in luck.”

DT: “Focused, determined, slightly anxious. I can be a little anxious when I get in the car, but I don’t focus on that. The main goal is to be calm—the calmer you are, the smoother you will be.”

DT: “Anything with four wheels. Racing and cars, that’s all I want. I’d have it use pictures and videos—especially how-to videos.”

DT: “Well, mine was pretty simple. I learned in second grade how to write cursive and that turned into my autograph.”

DT: “I pull the suit down, grab some water, maybe change my shirt—we do sweat a good amount in these cars. A few minutes later, I go talk to my team about the car and how it was, and then we just continue on.” 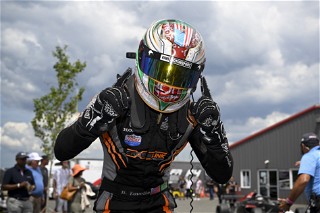 DT: “I’d probably be a car journalist. Not like a writing journalist, but like the Top Gear guys—I like how they review cars. Jeremy Clarkson, Chris Harris, Throttle House [YouTube channel]—all those people have really cool jobs.”

No, it can be anybody.

I know you really enjoy working on cars and it’s something you’re pursuing further education in. If you were building your own street car, what would you build?

DT: “I’d either have to go with a Twin-Turbo Huracan or a Full Bolt-On Nissan GT-R. I’d do a lot of customizations to it; it’d be fast.” 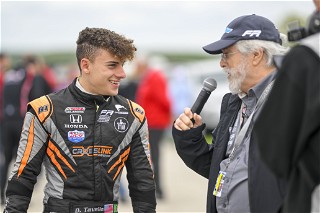 Last week I talked to Raoul Hyman and I asked him for a question to ask you. He wanted to ask, what’s your hair routine before a race?

DT: “Believe it or not, I sleep and this is how I wake up. I just take a shower, sometimes I leave a slight bit of conditioner in my hair, but that’s it.”

Do you have a question that I can ask the next driver I interview? It will be Jason Alder.

DT: “That was a good question from Raoul! I don’t know Jason that well. Oh, I’ve got one! His engineer used to be my engineer, so ask him how hard is Tim on him.”