Get to know Jason Alder in 10 Questions

Get to know Jason Alder in 10 Questions

Jason Alder arrived in the Formula Regional Americas Championship Powered by Honda (FR Americas) paddock last fall at Circuit of The Americas, where he won the race in his very first series start. Since then, the driver joined TJ Speed Motorsports and went on to secure his second FR Americas victory at Road America in May. Piloting the No. 77 Drive for Diabetes Awareness / HAKUN Ligier JS F3, the Maryland native currently sits third in the FR Americas driver championship point standings.

1. What topping absolutely never belongs on a pizza?

JA: “No, I do not believe in luck. I don’t think there’s some kind of special force out there that manipulates whether something good or bad happens.”

3. What emotions do you go through during a race?

JA: “Quite neutral. I’m quite unemotional, which has its pros and cons. Definitely not anger or frustration—never. Mainly happiness, satisfaction, joy and excitement." 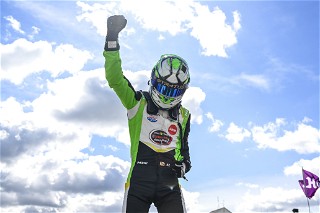 4. If you were developing the next big social media platform, what would it be used for?

5. How did you come up with your autograph?

JA: “I’m still coming up with my autograph. I feel like every time I sign it, it’s a little bit different. My penmanship is not wonderful, but I’m getting there.”

Do you remember how old you were when you first started practicing it?

JA: “Oh my goodness, I was young, maybe six or seven? I had just learned cursive, and that’s what we’d do, we would sign our names. I struggled so much with the consistency of letters and whatnot.”

6. How do you decompress after a tough race?

JA: “Same way every time. Get out of the car. Take off my gear. Sit down with a track map in front of me and I write down some notes for myself. Then I talk to the guys in the hauler; they help me figure out what went wrong and how to not do that in the future. Then of course, we always talk about the positives that we can talk about. For me, being positive and optimistic is so much more beneficial than just being heavy on the criticism. Hearing those positive things definitely makes me do better.”

7. If you didn’t drive racecars for a living, what would you do?

JA: “Work on race cars for a living. No matter what—I’m going to race cars for as long as I can—but when I eventually stop, I will still be doing something on or about race cars, for sure. This industry has my heart.” 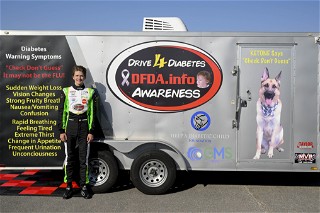 8. Who in the paddock have you known the longest and how did you meet?

JA: “Probably my teammate, Nick Persing. I met him back in 2020 at VIRginia International Raceway during the F4 race. Back then I was just a fan; I had never driven anything open wheel. I heard about this F4 thing—it seemed super cool and super interesting. We came out to visit, as it was only a couple hours away from my house, and that’s when I met Nick. He was on the Jay Howard team at the time. It’s kind of crazy. After that, we ended racing as teammates at VRD in F4 in 2021, and then we both made the jump to Formula Regional Americas. Now, here we are at TJ Speed Motorsports. He's been there, quite literally, since the beginning.”

9. You started out racing go karts, but it didn’t take long before you switched to Bandoleros and Legends—you were headed toward stock cars. What drew you back to open wheel cars and formula racing, and would you ever want to go back to racing closed wheel cars?

JA: “I was loving the oval stuff, but I was struggling with the physicalness on the ovals. Obviously, you have a lot of bodywork around you, and the way stock car racing works, it’s very physical. There’s a lot of bumping and a lot of contact. That was hard for me to take because where I came from in go-karting, almost all contact was not okay. I didn’t drive two strokes, which were definitely more physical. I was driving four strokes on the East Coast, and that was very non-physical—kind of like open-wheel racing. When I jumped into these fender race cars, I struggled with that. I couldn’t move people out of the way, even though that’s how you’re supposed to do it. So, when I discovered that there was a form of racing that you didn’t bump people in, I loved that idea. I saw some videos of this open-wheel thing, and I just fell in love with it. When I did it the first couple of times, it was exactly what I wanted to do.”

Would you ever consider going back?

JA: “If the opportunity ever presented itself, I think yes, I would. Especially now that I’ve been unable to make contact with other people, if I was in a situation where it was not only allowed, but that’s what you had to do—I would be able to do it.” 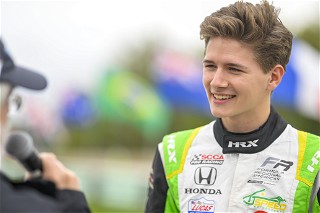 10. Last week I talked to Dylan Tavella and I asked him for a question to ask you. He wanted me to ask, what’s it like working with Tim [Neff, TJ Speed Motorsports’ team owner]?

JA: “Tim is an Aussie. He’s the first Aussie that I’ve had a close relationship with. He’s such an interesting person. He’s very quiet, and he’s got a good head on his shoulders. Although, I feel like in situations where he should be livid or bouncing off the walls, he’s just super calm, cool and collected. It’s like ‘Tim, you should be expressing immense emotion right now!’ Instead, he’s just like, ‘Okay, okay, yeah, okay.’ He’s so smart. It makes sense that he’s running a race team.”

Is there an “Aussie”-mentality to the team? Are there cultural differences that you’ve noticed working with them? I’m sure there’s some language differences to get used to.

JA: “For sure—the lingo is different. Tim is not the only foreigner to the Americas on the team; it seems like we have more foreigners on the team than people from America. Almost everybody has an accent, there’s a little bit of a language barrier between everybody.

“Tim does a very good job of watching and doing things behind-the-scenes. The engineers have a massive role in the day-to-day operations of the team when we’re at the race track. Most of the strategy and calls come from them, and if they aren’t sure about something then they’ll talk to Tim. After that, they’ll come back to the drivers and we’ll make a decision together.”

Do you have a question that I can ask the next driver I interview? It will be Nick Persing.

JA: “If he had to stop racing, would he take up surfing as his professional sport, and why or why not?”