Get to know Noah Ping in 10 Questions

Get to know Noah Ping in 10 Questions

1. What topping absolutely never belongs on a pizza?

3. What emotions do you go through during a race?

NP: “All of them. [laughs] Honestly, I try to stay level. I try to not let my highs get too high, or my lows get too low.” 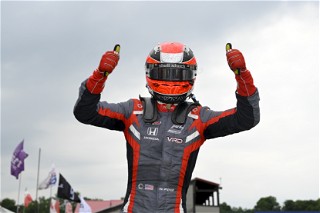 4. If you were developing the next big social media platform, what would it be used for?

NP: “Just being yourself. There’s a new app called Be Real; I love that app. I don’t like all the fake people that are out there, so I think a picture every day of what you’re doing is awesome. Just showing you—who you really are and not this fake social media persona.”

5. How did you come up with your autograph?

NP: “Honestly, it took time. I started out with something simple, but it looked a bit boring, so I decided to add some pizzazz to it. Over the years, it’s developed—it’s ever-changing. I probably started practicing it when I was about eight-years-old; me and my buddies would goof around practicing our autographs.”

6. How do you decompress after a tough race?

NP: “Just hanging out with the team. They’re very supportive—that’s something that I noticed about VRD, everyone is especially supportive of each other. I just hang around the people that I trust and love.”

7. If you didn’t drive racecars for a living, what would you do?

NP: “Oh, I don’t know. I played hockey back in the day, so I’d say that I’d be a hockey player. Honestly, I love the beach, so maybe I’d become a fisherman or something like that.”

8. Who in the paddock have you known the longest and how did you meet?

NP: “I really don’t know too many people here in the paddock. The one that I’ve known the longest is probably Dan [Mitchell, team owner of VRD]. We’ve been friends for a little bit.” 9. You and your brother are both racecar drivers. I’d think it’d be cool to have someone as close as a brother by your side going through the same thing, but do you think it makes your path any easier or harder in any way?

NP: “I don’t think it makes it either harder or easier, but I do think it makes it more special. To have me and my little brother racing and both doing really well in our seasons is awesome. It’ll be interesting to see what we do next year. We might be on the same team, in the same paddock, which would be really cool. I think it’s great to be going through this together.”

10. Last week I talked to Bryson Morris and I asked him for a question to ask you. His question is, what's your favorite car that you have driven and why?

Do you have a question that I can ask the next driver I interview? It will be Matt Christensen.

NP: “I got it—ask him what makes him wear his hats the way he does. [laughs]”