Get to know Alex Berg in 10 Questions

Get to know Alex Berg in 10 Questions

Second-generation racer Alex Berg finished fifth in the 2022 Formula 4 United States Championship Powered by Honda standings. Racing the No. 08 Ligier JS F4 for Doran-Kroll Competition, Berg fought most of the season as a single-car team racing against powerhouse organizations that boasted multiple drivers and entries. He finished the season with four podiums and 12 top-10 finishes during the season’s 18 events.

AB: “I can get very angry, very happy, upset; sometimes I can get dazed and confused [laughing]—pretty much every emotion that you’d go through in a high-stress environment.” 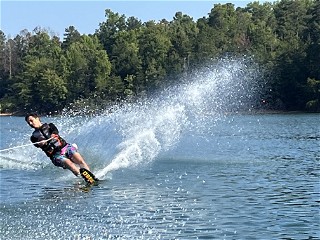 AB: “I was thinking about this earlier. I’d probably make one that’s just a way to share photos of cars. Something that has an element like Quora and Reddit, where you can ask questions about race cars.”

AB: “I was probably about nine years old at the time; I just wrote my name in cursive and that’s still my autograph today.”

AB: “By being alone, usually. I spend some time self-reflecting. A lot of times I’ll go blow off some steam by watching the other racecars on the track.”

AB: “I would want to be a racing commentator, actually. Or a race photographer—either one.”

AB: “I’d have to say Aaron Jeansonne. I met him at the Mazda Shootout in 2020. He won the MX-5 Cup Scholarship when I won the Spec Mazda Scholarship; that was at Road Atlanta in November 2020.” On your driver survey earlier this year, you said that you can speak three languages—English, French and Spanish. How’d you become trilingual?

AB: “I speak Spanish—well, Spanglish—with my mom. Usually, my mom talks to me in Spanish, and I reply in English, or Spanish, or a mix of both. I learned Spanish growing up; my great-grandmother moved in with us when I was eight or nine, and she lived with us for seven years until she passed away at 100 years old. She only spoke Spanish. I was always trying to help, and that’s really how my Spanish got better—speaking to her. I don’t speak as much French, anymore. I went to a French elementary school—not because of the part of Canada that I’m from, but because my parents wanted me to go to a French elementary school. While I learned French there, I don’t practice it as much anymore, so I’m not as fluent.”

If you were to learn a fourth language, what would you want to learn?

AB: “I’d say either Italian or German—there’s a lot of car culture there.”

I last spoke with Matt Christensen and I asked him for a question that I could ask you. His question was what do you like better—the Miata or the F4 car, and why?

AB: “They’re both fun cars to race. I think keeping in both formula cars and sports cars gives me a good balance of really close door-to-door racing and not forgetting my roots. All the not-so-good habits that you learn in sports car racing, driving formula cars counteracts that, I guess you’d say. It’s just a good balance. They’re both equally fun.”

Do you have a question that I can ask the next driver I interview? It will be Ryan Shehan.

AB: “Hmm, I know he lives in Texas. What’s his favorite thing about Texas?”